Twinning project for the National Bank of Serbia successfully completed

On 9 March 2020, the Twinning project "Strengthening of the Institutional Capacities of the National Bank of Serbia in the Process of EU Accession" was successfully completed. Invited by the Croatian National Bank, Hanfa participated in this project in activities related to the insurance sector, which in the Republic of Serbia is under the supervision of the National Bank of Serbia. A team of Hanfa's experts participated in missions related to the following topics:

The aim of this Twinning project was to arrange a quality preparation of the National Bank of Serbia for joining the European System of Central Banks, upon the accession of the Republic of Serbia to the European Union. The participants in this project included a consortium of central banks of Germany, Croatia and Romania, with the involvement of experts from central banks of England, Austria, Portugal, Slovakia and Slovenia, as well as the German Federal Financial Supervisory Authority (Bundesanstalt für Finanzdienstleistungsaufsicht - BaFin) and Hanfa. Apart from topics from the area of insurance, other activities covered by the project included topics in the areas of economic research, financial stability, foreign exchange reserve management, financial reporting, international cooperation, liberalization of movement of capital, protection of financial services users, accounting, and IT reporting and management.

The project achieved all the planned goals and all twelve project activities within ten areas of the operations of National Bank of Serbia were successfully completed. This Twinning project was funded by the European Union in the amount of EUR 800,000.00, and it ran from September 2018 to March 2020.

Mr Ante Žigman, President of Hanfa Board, emphasized the following: “Croatia is the last country to become a member of the EU and thus has fresh memories of activities carried out to prepare for membership. Hanfa finds its lessons learned along the way, but also those gained through the EU membership, very useful and is happy to share them with countries preparing for membership. During the 18 months of this Twinning project, Hanfa's team of nine experts worked very intensively with colleagues from the Insurance Supervision Department of the National Bank of Serbia, and I believe that there will be new opportunities for successful cooperation between our two institutions even after the end of the project. I am convinced that the project has fulfilled its goal and that the National Bank of Serbia is well prepared for joining the European System of Central Banks upon the accession of the Republic of Serbia to the European Union. I would also like to point out that Hanfa has been happy to participate in various cooperation projects for many years, with an emphasis on supporting countries in their preparation for the EU membership, and I am pleased that these are mostly out neighbouring countries.“

This was one of the technical cooperation projects involving Hanfa's experts, funded by the European Union. Hanfa also participates as a consortium member in the Twinning project for the financial sector in Montenegro "Support to Financial Services Regulation", which also includes central banks of Croatia, Germany and the Netherlands and BaFin. This project runs from April 2018 to July 2020, and the beneficiaries are the Insurance Supervision Agency of Montenegro, the Capital Market Commission of Montenegro and the Central Bank of Montenegro. In addition, over the years Hanfa's experts have participated in the implementation of the Twinning project in North Macedonia (“Further harmonisation with the EU in the field of insurance and increase of market operations”) and in TAIEX technical cooperation programmes in Montenegro, North Macedonia and Ukraine. 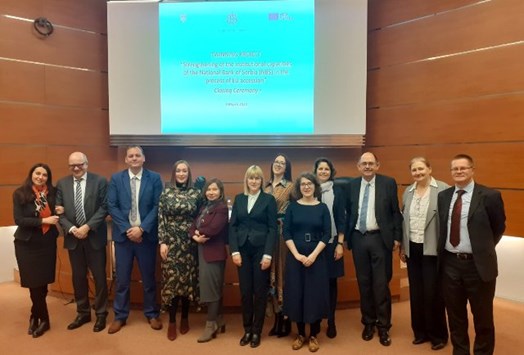