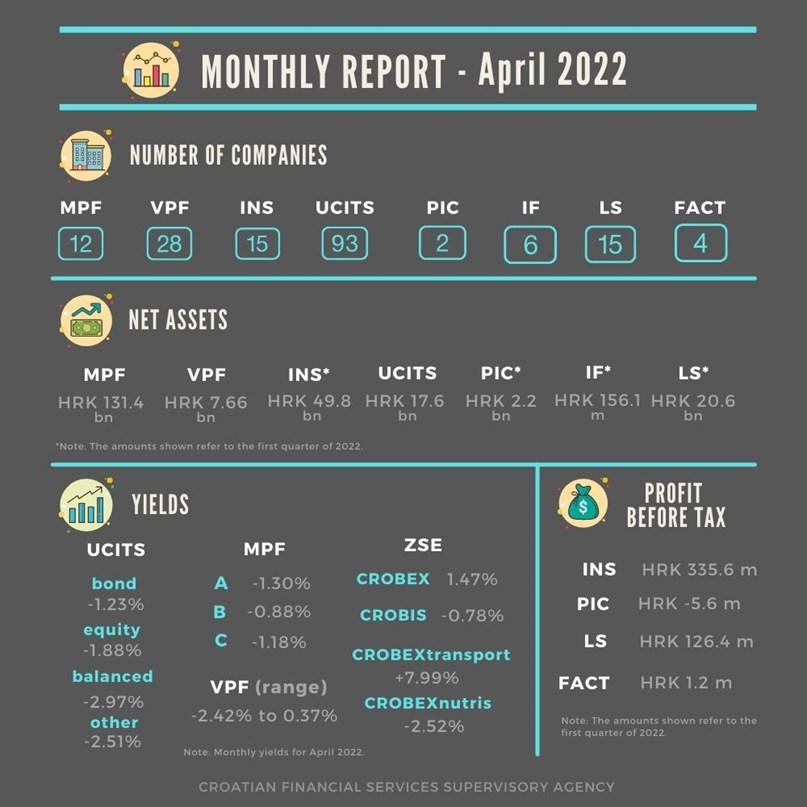 At the end of the first quarter of 2022, there were two pension insurance companies operating on the market and covering 8,642 and 5,471 users in the area of mandatory and voluntary pension insurance respectively. The total assets of the PICs amounted to HRK 2,2bn at the end of the first quarter of 2022, rising by HRK 641.3m or 41.8% compared to the same period last year. Their total comprehensive income in the first three months reached HRK -6,1m, decreasing by HRK 7.2m relative to the same period in 2021.

The total turnover on the Zagreb Stock Exchange reached HRK 160.9m in April 2022, decreasing by 50.7% on a monthly basis. Market capitalisation fell slightly (by 0.41%) relative to the previous month and stood at HRK 269.9bn, of which stocks amounted to HRK 140.0bn, bonds to HRK 129.8bn and ETFs to 66m. As for stock indices, the largest monthly rise was recorded by CROBEXtransport (7.99%), while CROBEXnutris recorded the largest monthly decrease (-2.52%). A monthly increase was also recorded by the major ZSE stock indices CROBEX (1.47%) and CROBEX10 (1.48%), while bond indices are still negative on a monthly basis, namely CROBIS -0.78%, and CROBIStr -0.59%. Valamar Riviera d.d. was the stock most traded in April, with its turnover amounting to HRK 19.31m (12.82% of the overall trade in stocks in April) and an 8.70% monthly price increase.

In April 2022, there were 93 UCITS operating on the market, two funds fewer than in the previous month, as one bond fund was liquidated, while another bond fund was merged with a feeder fund. Total net assets of UCITS amounted to HRK 17.56bn at the end of the month, decreasing by HRK 0.52bn or 2.87% compared to the previous month. April saw a slow-down of the negative trend in monthly net payments, which remained negative (HRK -256.6m), primarily due to negative net payments recorded by bond UCITS (HRK -340.4m). Positive net payments were recorded by equity funds (HRK 34.5m), balanced funds (HRK 16.1m), feeder funds (HRK 15.4m) and funds categorised as “other funds” (HRK 17.9m). Bond funds’ net assets accounted for 67.1% of the total net assets of all UCITS at the end of April, while equity and balanced funds accounted for 12.7% and 7.1% of the total UCITS’ net assets respectively. As regards asset-weighted average monthly returns, all types of UCITS recorded negative monthly returns again: feeder funds -2.02%, equity funds -1.88%, balanced funds -2.97%, funds categorised as other funds -2.51% and bond funds -1.23%.

Net assets of the Fund for Croatian Homeland War Veterans and Members of their Families amounted to HRK 1.03bn (a 0.54% monthly increase), with the monthly return of the fund reaching 0.76%.

At the end of the first quarter of 2022, the total assets of 15 leasing companies stood at HRK 20.6bn, an increase of 4.42% on an annual basis. Income before tax recorded by the leasing companies rose by HRK 59.3m (88.3%) compared to the same period last year, amounting to HRK 126.4m. The outstanding contract value of active contracts continued its downward trend in the operating lease segment, decreasing by 2.65% on the annual level, while in the finance lease segment it rose by 5.67%. As regards the value of newly concluded contracts in the operating lease segment, the annual growth in contract value reached 4.27%, while this growth in the finance lease segment amounted to HRK 29.62%. This was mostly due to an increase in the value of contracts involving passenger cars (HRK 1.5bn), commercial vehicles (HRK 455m) and plant, machinery and equipment (HRK 205.6m) as leased assets. The total value of newly concluded contracts in the first quarter of 2022 increased by HRK 1.8bn (25.18%) on an annual basis.

The full report is available at Publications/Monthly reports.

[2]The data relating to the company undergoing liquidation proceedings were not included in the preliminary data shown.